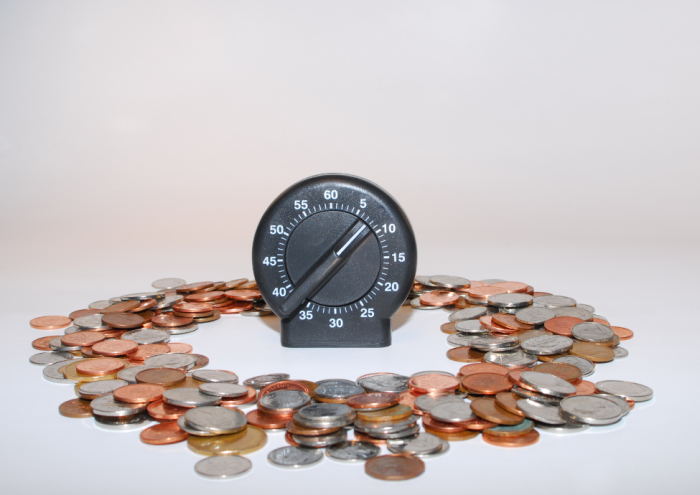 The dictionary definition of insolvency is, “the inability to pay one’s debts”  So, when The Social Security Trustees report that Social Security will be insolvent in 2034, what does that mean?

To begin, Social Security is not going bankrupt.  Political leaders and many in the media use the term “bankrupt” when they really mean “insolvent.”  But, time is ticking.  Consider an analogy.

A gainfully employed, married couple in their 50s enjoy eating out, taking vacations, and driving newer cars.  Their mortgage was just paid off.  Fast forward to age 63 when both retire.  Their income is now halved—two Social Security checks and one small pension.  The couple decide to continue spending at levels as if they were drawing their full salaries.

Yearly spending now exceeds income.  This can continue for a time as they draw down savings and investments and possibly sell assets.  At some point, though, resources will be exhausted.

At that point, the retired couple would only be able to spend commensurate with income, not a dollar more.  It would likely be quite shocking to suddenly have to cut expenses by a draconian 50% each month and year going forward.

Experts predict the program will a deficit in 2019, the first since 1982, and every year thereafter.  Full benefits continue because surpluses from past years are being used, similar to the couple using savings to keep spending at pre-retirement levels.

The Trustees note all past surpluses will be exhausted in 2034, earlier with a recession.  What then?  By law, Social Security can only pay benefits commensurate with payroll tax revenue collected, so beneficiaries will receive just 79% of their promised benefit.  The 21% cuts kick in automatically.  No debate.  No vote.

You would think Congress would address the problem now rather than wait for insolvency.  Just as with the couple, if their spending were altered slightly right after retirement, they too would have staved off insolvency.  The lack of interest by both political parties in Congress is disconcerting.  While some Social Security bills have been introduced by members, too many are political “giveaways” designed to appease constituents with promises of “higher benefits” rather than the comprehensive reform the program needs to sustain itself.  Naturally no one wants to get hit with “you’re cutting your Social Security.”  But lines like “Social Security must be preserved” are meaningless and unhelpful.

AMAC’s Social Security Guarantee takes a measured approach to preserve and modernize the program. It is balanced and fair.  One facet is a gradual setback in the retirement age.  In 84 years the full retirement age was increased one time and by only two years, despite a 20-year increase in life expectancy.  AMAC’s plan retains age 62 early retirement for those needing to exit the workforce then but gradually increases the full retirement age by two years without affecting those collecting or close to collecting benefits.  This is a major step toward achieving solvency.

Other changes include a tiered COLA, preserving benefits for the lowest income recipients, and a slight modification in the benefit formula for higher earners.  AMAC has endorsed other proposals such as recalculating the Windfall Elimination Provision and eliminating, or at least reducing “double taxation” of benefits.  Both would exacerbate the solvency issue on their own so we believe these provisions would have to be part of comprehensive reform to extend the solvency of Social Security for future generations.

Doing nothing equates to 21% across the board cuts for all in just over a decade.  Politicians who ignore Social Security or say “it’s off the table” are shortchanging current and future beneficiaries for short-term political gain.  Time is running out.  People are living longer, and families are having fewer children.  Politicians have known about changing demographics for decades and have chosen inaction.  Each passing year makes reform more difficult and potentially painful.

To learn more about AMAC’s Social Security Guarantee, including our Social Security PLUS plan that would allow the young to build wealth, visit https://amac.us/social-security/